Here's an honest and detailed review of the Batman Unburied Podcast Episodes. Read to find out whether the podcast is worth listening to.
By Brian AbugaUpdated:Jun 22, 2022
Reddit Twitter WhatsApp Facebook LinkedIn Telegram 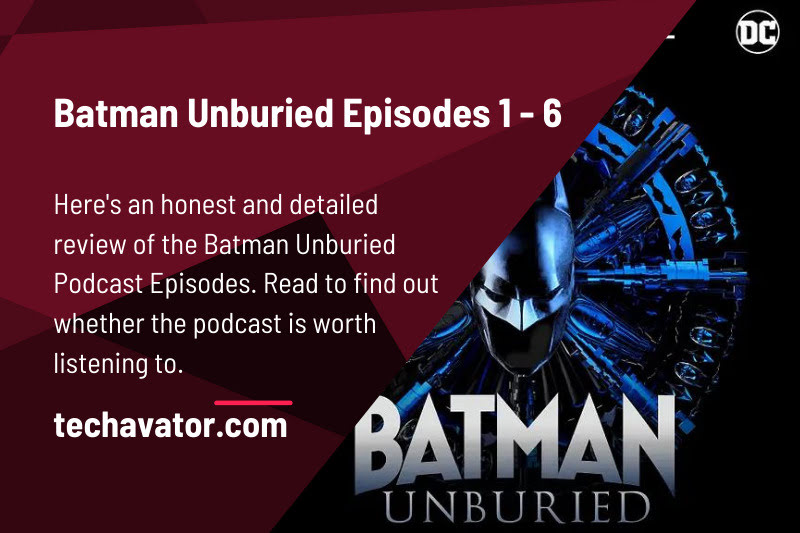 I’ve listened to the first six episodes of the Batman Unburied podcast and here’s an honest review of the new show! I’ve never done podcast reviews before but we had to do this. Depending on your response, I’ll do weekly reviews of this podcast.

Spoilers alert if you haven’t listened to the podcast yet but I’ll try to avoid them as much as possible. Be warned!

New Batman Unburied episodes come out every Tuesday featuring two 20-40 minute episodes. In this regard, I’ll break down and review the episodes in pairs.

In typical Batman stories fashion, the first episode begins with police sirens and a radio/TV announcer talking about the latest criminal lunatic terrorizing the residents of Gotham (The Harvester).

Within the first minute, we’re introduced to Bruce Wayne—Dr. Bruce Wayne (Winston Duke) and it appears to be that he’s not the Batman in this storyline. He works on the body of a victim of The Harvester (Sam Witwer).

Before we move on, the sound effects are pretty awesome in this show. For instance, as Dr. Bruce Wayne is performing the autopsy, you can clearly hear every disgusting sound that the procedure makes.

It’ll sound scary and creepy, but you’ll love every bit of it if you’re a Batman fan. Dr. Wayne is later attacked by the killer of the victim he’s working on but he survives. It’s at this point that we realize that his parents are still alive!

We won’t get into the details of it all but the fact that Bruce Wayne isn’t Batman and his parents are alive will throw you off a little bit. Furthermore, every character and event at this stage will also feel off but everything makes sense and adds up in the subsequent episodes.

But there’re instances when Bruce Wayne is haunted by bat noises that hint that there’s something wrong in the story’s setting and that we’ll get our Batman at some point.

The episodes are quite captivating and you’d be left yearning for more. On a scale of 1 – 10, I’ll give the first pair of episodes an 11! You don’t have to be a Batman fan to enjoy them.

Right off the bat (pun not intended), the third episode makes it clear that the events involving Bruce Wayne in the first two episodes were not in the real world. We get to know through Barbara Gordon (Gina Rodriguez) and Rene Montoya that Batman does exist and has gone missing and Bruce Wayne is presumed to be dead.

One more spoiler—Barbara is aware that Bruce Wayne is The Batman which hints that she may have been Batgirl at some point in this universe.

The stories in these two episodes especially those involving the police are a bit too sluggish given the momentum that had been set in the first two episodes. At this point, things are a lot more predictable given that we get an idea of what happened to the Batman.

The introduction of The Riddler (Hassan Minhaj) spices things up and brings in some tension. The writers made it more interesting by making The Riddler an anti-hero in this storyline rather than an outright villain since he works with Barbara.

He uses his experience to help Barbara in investigating The Harvester case and finding out what really happened to The Batman. Alfred (Jason Isaacs) also features in these episodes with his sarcasm as top-notch as ever when interacting with The Riddler.

Without The Riddler and Alfred, these two episodes would be boring AF! Gina Rodriguez doesn’t really perform well as Barbara Gordon but is tolerable. In this regard, on a scale of 1 – 10, these two episodes average out at 6. Would be worse if not for the aforementioned duo.

Spoiler alert! The Riddler knows that Bruce Wayne is The Batman.

The first two episodes were all in Bruce’s head and the next two were all about the real world. In 5 – 6, we have a clear separation. It’s finally revealed that Bruce Wayne was captured and someone was trying to extract something from his mind hence the story we got when the series started.

Batman is known for overcoming even the powers of mind control as we learn in this episode. As much as he managed to get away, his captor Professor Hugo Strange managed to extract what he needed from Bruce Wayne’s brain.

For the die-hard Batman fans, you’ll get to hear the iconic “I’m Batman” line at this stage. Despite the many critics you’re going to find online, I opine that Winston Duke’s Batman voice is the best we’ve heard so far besides Christian Bale’s. They sound a lot alike.

These two episodes do a good job of filling up the gaps in the continuity from previous episodes. However, the explanation as to how The Riddler came to know Batman’s true identity is underwhelming.

Again, contrary to the opinion of the many critics of the show—I found the music in their respective scenes quite good. You’ll have to listen for yourself to decide.

On a scale of 1 – 10, these two episodes together get a solid 8! We’re out of the introduction phase and the story has just begun.

Why You Should Listen to Batman Unburied

Why You Shouldn’t Listen to Batman Unburied

Let me know your thoughts on the show in the comments section and other similar shows that you listen to. Check back for more honest future episode reviews.