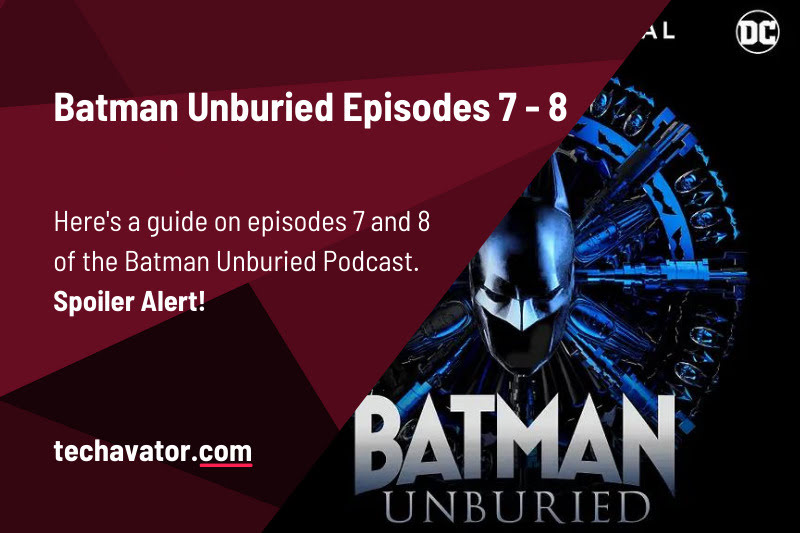 After listening to episodes 7 and 8, we could say that the first 6 episodes were a build-up to the real conflict and meat of the story.

These are the second last pair of episodes and they got off to a good start. It mainly focuses on Batman doing what he does best—detective work. We also get to meet some iconic Batman villains.

Here’s a breakdown of the two episodes.

Episode 7 starts with Bruce Wayne doing detective work in his ‘work clothes’. Batman goes to Arkham Asylum to talk to Hugo Strange but he finds him dead, and he begins investigating the case to find out what’s really going on. Strange wasn’t the mastermind of everything after all. There’s an even bigger player in the story.

As part of his investigation, Batman speaks to several Arkham Asylum inmates. They include; The Mad Hatter, King Tut, and Calendar Man who seem to know something but aren’t too willing to cooperate.

The best part of this episode is that we get to hear the Batman voice full-time. I’ll stick to what I wrote in my previous review—Winston Duke’s Batman voice is one of the best so far. Also, the music and sound effects are as awesome as in the previous episodes.

The only problem you’re going to notice in the sound effects department is the constant swooshing of Batman’s cape even when he’s just walking! It shouldn’t do that unless he’s making a tall jump.

We understand the hard work the sound guys had to put in to make the podcast engaging and entertaining, but the cape swoosh sounds were unnecessary in almost all instances that they got added.

Nonetheless, this flaw doesn’t take away anything from the awesomeness and the nostalgia that the 7th episode carries. The voice actors of the Arkham Asylum inmates totally nailed it—especially the Mad Hatter.

As part of his investigation, Batman listens to the deceased Professors’ recordings of sessions with Arkham Assylum patients. And we get introduced to the seemingly actual big bad!

Poison Ivy is one of Strange’s patients and we get to hear a sad and interesting backstory that made her who she is in the present. The Poison Ivy-themed music covering her memory flashbacks is right on point and created a mood that wouldn’t have been possible without it.

She sounds as stunningly deadly as she’s always depicted in the comics and on-screen. The entire episode focuses on Ivy and her backstory with Batman barely doing anything other than playing Ivy’s therapy session recordings.

We also get to know what Hugo Strange was digging for in Bruce Wayne’s mind. A memory key to the location of a tree important to Poison Ivy.

So far before the final two episodes, episode 8 is the best for the following reasons. First, flashbacks done in audio format are odd and interesting at the same time.

Second, the voice actress (yet to find out who she is) behind Poison Ivy nails it – unlike you know who. Third, the episode’s name (Deadly Things) summarizes the whole story.

Lastly, as a listener, it’s easy to sympathize with Ivy despite her being the big bad.

On a scale of 1 – 10, this episode gets a solid 11—it’s as captivating as the first two episodes if not better.

If you haven’t listened to these two episodes yet, please do—you’ll enjoy every minute of it. If you missed my previous reviews, you can read them in my previous post.